StereoKit uses an immediate mode UI system. Basically, you define the UI every single frame you want to see it! Sounds a little odd at first, but it does have some pretty tremendous advantages. Since very little state is actually stored, you can add, remove, and change your UI elements with trivial and standard code structures! You’ll find that you often have much less UI code, with far fewer places for things to go wrong.

The goal for this UI API is to get you up and running as fast as possible with a working UI! This does mean trading some design flexibility for API simplicity, but we also strive to retain configurability for those that need a little extra. 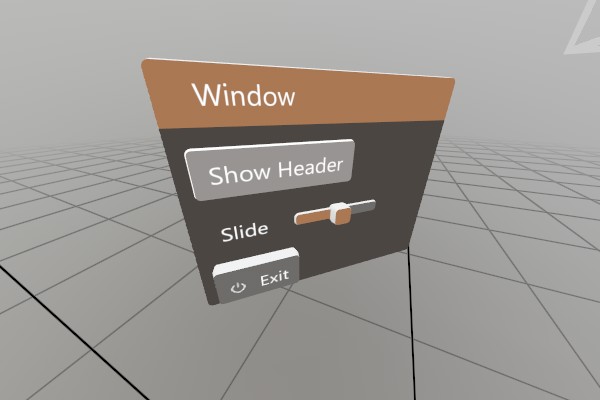 Since StereoKit doesn’t store state, you’ll have to keep track of your data yourself! But that’s actually a pretty good thing, since you’ll probably do that one way or another anyhow. Here we’ve got a Pose for the window, off to the left and facing to the right, as well as a boolean for a toggle, and a float that we’ll use as a slider! We’ll add this code to our initialization section.

Then we’ll move over to the application step where we’ll do the rest of the UI code!

We’ll start with a window titled “Window” that’s 20cm wide, and auto-resizes on the y-axis. The Units class is pretty helpful here, as it allows us to reason more visually about the units we’re using! StereoKit uses meters as its base unit, which look a little awkward, especially in the millimeter range.

We’ll also use a toggle to turn the window’s header on and off! The value from that toggle is passed in here via the showHeader field.

Here’s that toggle button! You’ll also notice our use of ‘ref’ values in a lot of the UI code. UI functions typically follow the pattern of returning true/false to indicate they’ve been interacted with during the frame, so you can nicely wrap them in ‘if’ statements to react to change!

Then with the ‘ref’ parameter, we let you pass in the current state of the UI element. The UI element will update that value for you based on user interaction, but you can also change it yourself whenever you want to!

Here’s an example slider! We start off with a label element, and tell the UI to keep the next item on the same line. The slider clamps to the range [0,1], and will step at intervals of 0.2. If you want it to slide continuously, you can just set the step value to 0!

Here’s how you use a simple button! Just check it with an ‘if’. Any UI method will return true on the frame when their value or state has changed.

And for every begin, there must also be an end! StereoKit will log errors when this occurs, so keep your eyes peeled for that! 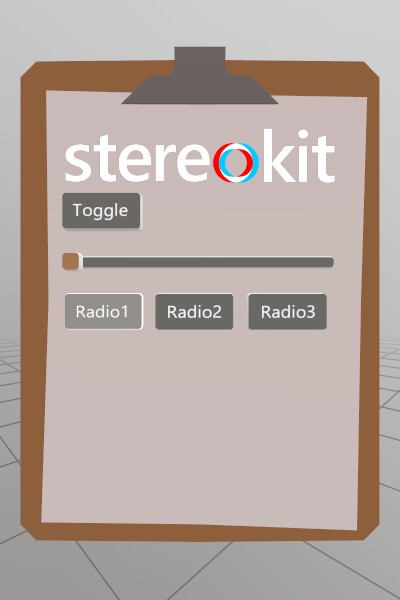 Mixed Reality also provides us with the opportunity to turn objects into interfaces! Instead of using the old ‘window’ paradigm, we can create 3D models and apply UI elements to their surface! StereoKit uses ‘handles’ to accomplish this, a grabbable area that behaves much like a window, but with a few more options for customizing layout and size.

We’ll load up a clipboard, so we can attach an interface to that!

And, similar to the window previously, here’s how you would turn it into a grabbable interface! This behaves the same, except we’re defining where the grabbable region is specifically, and then drawing our own model instead of a plain bar. You’ll also notice we’re drawing using an identity matrix. This takes advantage of how HandleBegin pushes the handle’s pose onto the Hierarchy transform stack!

Once we’ve done that, we also need to define the layout area of the model, where UI elements will go. This is different for each model, so you’ll need to plan this around the size of your object!

Then after that? We can just add UI elements like normal!

And while we’re at it, here’s a quick example of doing a radio button group! Not much ‘radio’ actually happening, but it’s still pretty simple. Pair it with an enum, or an integer, and have fun!

As with windows, Handles need an End call.

And there you go! That’s how UI works in StereoKit, pretty simple, huh? For further reference, and more UI methods, check out the UI class documentation.

If you’d like to see the complete code for this sample, check it out on Github!